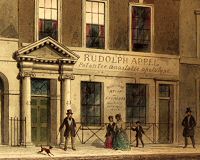 This is site of The 43, Meyricks notorious twenties night club.

Description: Kate Meyrick was Irish and came to London just after the First World War to run nightclubs. She was frequently fined for breaches of the alcohol licensing laws and in 1929 was successfully prosecuted for bribing policemen to ignore these breaches. This didn't damage her career; she went back to running nightclubs and died in 1933.

This was her most famous venue - 'The 43', popular with the more raffish end of the smart set at the time.

She went on to write the infamous banned book Secrets of the 43. Although it was probably quite innocuous by today's standards, no doubt it could have shown some prominent people in a poor light, which may account for its suppression.