St George the Martyr and Dickens 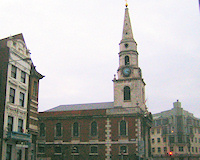 Description: This church is also known as Little Dorrits Church, and was the scene for the baptism and marriage of a Dickens heroine (in his novel Little Dorrit). In fact his father was imprisoned for
debt in the Marshalsea prison next door the surviving wall of which adjoins the north side of the churchyard.

Dickens lived in nearby Lant Street
as a teenager, before he began his literary career. There is a small representation of Little Dorritt in the east window of the church.

The second version of this church appears on some early maps and drawings of Southwark and can be seen in Hogarths picture of Southwark Fair in 1733. It was demolished 2-3 years alter and rebuilt in it's current guise.

2» Is the rumour about the face of the clock on the Bermondsey side is painted black because the people of Bermondsey didnt contribute much towards funds for the clocktower being built? (B Richards)
Posted by B Richards on 2010-09-27
1» Ive yet to visit but my father repainted the cherubs in the 1950s. (G Davis)
Posted by G Davis on 2009-11-14