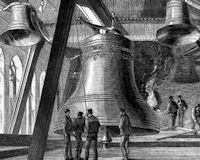 The name Big Ben actually refers to the 13-ton bell inside.

Description: The great London landmark that is 'Big Ben', that spreads its timely view across the capital has a secret...

'Big Ben' does not refer to the clock tower or the clock face ... but to the 13-ton bell inside! Well now you know!

The Elizabeth Tower stands at the north end of the Houses of Parliament or Palace of Westminster, was completed in 1859.

The Clock Tower you see today is not the first tower to be built in Parliament's grounds.

The Elizabeth tower stands on the ground where an original tower was built in 1288-90 during the reign of King Edward I. It was located on the north side of New Palace Yard and contained a bell and clock. The bell (called Great Edward, and later Great Tom), struck on the hour.

A second tower replaced the original in 1367 and was the first public chiming clock in England. By 1707, this tower had fallen into disrepair and was demolished. A sundial was put up in its place.

Then in 1834 a terrible fire destroyed most of the Palace of Westminster and architect Sir Charles Barry's design was successful but he was told to add a tower to his design in 1836. Tower construction began then in September 1843, and this is what we see today.