The Ship and Blue Ball 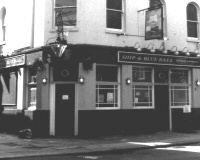 Here in the 1960s, the 'Great Train Robbery' was planned.

Description: It was here in the 1960s that the 'Great Train Robbery' was planned and, allegedly, a false wall in the games room concealed the stolen millions.

The pub sadly closed in 1994 and is now in commercial use as flats.

6» Also descended from William Lake, via his daughter, love to hear from anyone researching them. (sue hill)
Posted by sue hill on 2012-01-01
5» Hi Alan. It appears that were related! Id be delighted to share each others research. Ive been researching the family for over a year, and although I still have many "blanks" to fill in, I have found some very interesting facts. Please Email me at lakecd@isp.com (Donald Lake)
Posted by Donald Lake on 2010-09-17
4» Hello Donald. I too have been tracing my family history and have established that my great-great-great-grandfather was William Thomas Lake of the Ship and Blue Ball. Im descended via William Ts daughter Helen (Ellen), born c.1863, married to Walter Oram in 1886. Id be glad to share the results of my research and to hear the results of yours. Alan Longley (Alan Longley)
Posted by Alan Longley on 2010-08-23
3» The Comments by Edwin Harris are very interesting, and answer the question I had about how the "Ship" fared during the Blitz. I am tracing my family genealogy, and there were a number of Victuallers in the family. Before William T. had the "Ship", he was victualler of the Middleton Arms on Mansfield St.(now Whiston Rd.). I erred in my earlier comment, he was my GREAT grandfather. It was his son, William J., who emmigrated in 1880. Also, William T.s wifes name was Helen, not Harriett, as mentioned on another Pub website.. Donald Lake (Donald Lake)
Posted by Donald Lake on 2009-11-18
2» I was born while my father was licensee of the Ship, & I was living there during the Battle of Britain, although when the Blitz started I became an evacuee. The pub was in the same block as Jeremiah Rotherhams, a very large wholesale establishment which was entirely burnt down during the big air-raid on the City on the night of 28/9 December,1940. When I returned to London, I was astonished to find that the pub was standing alone in an otherwise ruined block. It had been saved by firemen who were customers. (Edward Harris)
Posted by Edward Harris on 2009-09-14
1» My grandfather, William T. Lake, was the licensed victualler of this pub from about 1870 to 1884 when he immigrated to Chicago Illinois, US. He and wife Harriett had 7 children while in England, 4 more in the US. I went to the pub while visiting London in 1982, and it looked the same as in the above photo. I dont know much about William, other than he supposedly attended Oxford and was on the rowing team. Id appreciate any other information about him if anyone has any. Thank you. (Donald Lake)
Posted by Donald Lake on 2009-05-27

Rule Brittania in The Dove», 7.2km

The Marquis of Cornwallis», 0.5km