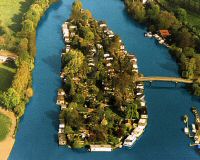 Taggs Island is a dark horse, with a colourful past.

Description: This is Tagg's Island, a haven for houseboats and wildlife.

But it wasn't always this peaceful, it was named after Thomas George Tagg who in 1841 leased a piece of the island near an old bar called The Angler's Retreat where he rented skiffs and fishing punts.

Hi son Tom Tagg Junior constructed boats and received 12 gold medals for his boats in both Britain and France.

He built a hotel for the wealthy and made the island a major river attraction. For example, JM Barrie rented a houseboat here in 1887 and wrote many of his early articles and plays on the river. One of his plays was called 'The Houseboat' but had to be changed when another play of the same title was discovered.

Fred Wescott was an entertainer and used to busk at the lock near Hampton Court at weekends. He made a pledge that once he had the money, the first thing he would do would be to have houseboat on Taggs Island. He changed his name to Fred Karno and made his fame and fortune from Fred Karno's Circus. His list of recruits to his troupe is extensive; Charlie Chaplin, Stan Laurel, Will Hay, Max Miller, Flanagan and Allen.

In 1912 he built a 'sumptuous palace' that had a resident orchestra and a young musician named Jack Hylton, who 30 years later was to become a theatrical impresario.

During the 2nd World War the island was taken over by AC Cars who converted the hotel to a factory and had a bridge built from the Middlesex bank. After the war AC cars made their renowned 3 wheeled invalid carriages on the island and the trains for Southend Pier.


1» I was really interested to read the history of the island as I am related to Emma Mary Tagg as she married my great great grandfather, William Wickenden. Emma was born in 1846 and I am looking to trace her family via the internet. (Lesley Ogden)
Posted by Lesley Ogden on 2008-06-04