Pete Townshend's Who Are You? 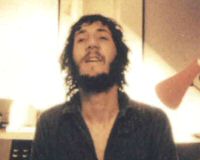 This is where Pete Townshend drunken stupor inspired Who Are You

Description: It was somewhere near here that The Who's Pete Townshend passed out only to be awakened by a police officer one night in 1977. He'd been haranguing some of the Sex Pistols about the state of rock music and stumbled out later that morning.

After a 12-hour meeting with Who management and the financial Svengali, Allen Klein, Pete Townshend was in no mood to stay sober. At London's Speakeasy club he collared the Sex Pistols' Steve Jones and Paul Cook, who took pity on the antediluvian star. Later, reeling from the nightclub, he settled in a Soho doorway before a policeman recognised him and urged him home.

The next day, he wrote a song about the night's events: 'I staggered back to the underground/ And the breeze blew back my hair/ I remember throwin' punches around/ And preachin' from my chair/ Who are you?'