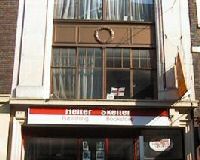 This is Regent Sound was, where the Rolling Stones 1st recorded.

Description: Bill Farley's Regent Sound was the affordable London recording studio where the Rolling Stones recorded their first album after rehearsing it at TPA Studios across the street. This was between January 3rd and February 25th, 1964.

Keith Richards said in an interview later: We did our early records on a 2-track Revox in a room insulated with egg cartons at Regent Sound. It was like a little demo in Tin Pan Alley, as it used to be called. Denmark Street in Soho. It was all done on a 2-track Revox that he had on the wall. We used to think, Oh, this is a recording studio, huh? This is what they're like? A tiny little backroom. Under those primitive conditions it was easy to make the kind of sound we got on our first album and the early singles, but hard to make a much better one.

While producer/manager Andrew Oldham sai d of it We did the first album in about 10 days. We'd decide to do a tune, but Mick wouldn't know the words, so Mick would run around to Denmark Street to Carlin Music to pick up the words to something like Can I Get a Witness? He'd come back 25 minutes later and we'd start.


10» Bill Farley was my nans brother. He came from Stoke Newington in England (Rachel Tatham)
Posted by Rachel Tatham on 2010-06-18
9» I have website dedicated to ZIOR=MONUMENT, heavy progressive early UK doom band : www.thefirstmonument.webs.com Both albums are recorded at TPA studios with Mr. Bill Farley and some singer w/name "Bugsy" in 1970. Any infos about Bill Farley,Bygsy,Keith Bonsor,Peter Brewer,..any story from TPA will be very apriciated and included on Zior site. Bill Farley was great producer and sound magician. Please,be free to leave any comments in my guestbook.Thanks! Peace! Radenko,Windsor,Ontario. www.thefirstmonument.webs.com (Radenko)
Posted by Radenko on 2009-10-18
8» I recorded the vocals to the first of two singles my little band had released in 68/69. Page One records changed our name to Pop Workshop. The main work on this single was recorded at Trident in St Annes Court off Wardour Street but I added the vocals in Regent Sound. Quite a small homely studio. Great days. (Alan Box)
Posted by Alan Box on 2009-10-14
7» Phil Collins recorded his 1st ever single "Lying,Crying,Dying" with the band Freehold here back in 68....Jeffx. (Jeff Slater)
Posted by Jeff Slater on 2009-09-20
6» (Geoff Penn)
Posted by Geoff Penn on 2009-08-30
5» Ive always wondered who the first were to hear the groups Ive grown up with. Imagine the awesome feeling to have done this. Imagine going silently unknown all this time, never really taking the credit for any of this. How I wish I had been in that sudio during those days, not singing of course, but to have the honor of being the first and now the memories. Where would we be without Mr. Farleys studio? (cathleen florio)
Posted by cathleen florio on 2009-07-01
4» I worked in Regent Sound in 1969-71 and married Bill Farley (1938-2003). Bill recorded very many famous artists and future stars here and later on at TPA (which he built), Tangerine, Berry Street, and Studio 80 Studios. He also produced and managed. The list of stars is too long to write here but Bill Farley and Regent Sound were important contributors to the British music scene and should be remembered for this. Thank you. Edi Farley (Edib123)
Posted by Edib123 on 2009-06-30
3» We made our first demo disc here, in June 1964 produced by Andrew Oldham. We were a bunch of late teens lads from Hampshire and had written 2 songs which when recorded could have been tracks on the first Stones album produced earlier that year! We had exactly an hour to set up, sound balance, record and strip down before the next band came in, ÃÂ£38 for that and we got 8 acetate discs and the master tape. It was a brilliant sound and much treasured today, 44 years on. Thank you Regent Sound for capturing my past. (Geoff Penn)
Posted by Geoff Penn on 2008-10-18
2» My grandfather Jimmy, James Spencer worked their around this time - he was a sound engineer I think. (Sean Parry)
Posted by Sean Parry on 2007-03-15
1» I was roadie for the Tremeloes and we recorded the first number one (Here comes my baby) at Regent B, plus many others. Terrific sound and prescence in recordings. (Dave Cox)
Posted by Dave Cox on 2007-03-11

Moz and the Suedehead House», 1.6km

The Roebuck and the Sex Pistols», 2.9km