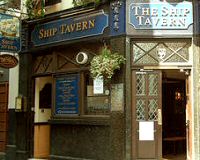 This is where James Archer gave secret Catholic mass

Description: The Ship Inn or Tavern here is famous for it's previous Priest in residence.


This was the area where where in the 18th Century Catholics secretly assembled for Divine service, the skivvie James Archer attracted the favourable notice of Dr. Challoner and was sent, in 1769, to study at Douai College.

He returned in 1780, after his ordination, to carry on the mission in the public house where he had formerly been employed. Jews had been banished and Catholics were forbidden from practising their religion on the penalty of death.

To get around this Archer would say Mass in the public bar while the congregation sat at tables with tankards of ale. Archer was never discovered but after one Mass, many of his parishioner's were rounded up and executed for heresy in Lincoln's Inn Fields.


Credits: In and Around Covent Garden magazine, sep 2006
http://www.theshiptavern.co.uk/

The Andover Arms in Hammersmith», 5.1km