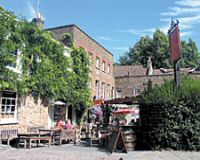 This great pub is a celebrity haunt and was a medical wonder!

Description: The pub's name recalls the centuries-old practice of Londoners climbing up to the village to fill a leather flasks with pure spring water rather than risk the cholera-riddled infected waters of London.
The water was collected from the natural springs and taken to a village pub, known as the Thatched House, where it was bottled and sold at threepence a flask. It was also sold to the taverns and coffee houses of London. Soon it acquired dubious medicinal qualities, relieving complaints.of idleness, dissipation and frivolity.

In 1874, the Thatched House was demolished and replaced by the Flask, a workaday Victorian pub in a working class area.

Victorian author Samuel Richardson described in his 18th-century novel Clarissa as 'a place where second-rate persons are to be found, often in a swinish condition.'

The Flask, was comedian Peter Cook's local, and other regular celebrities include Robert Powell and John Hurt.

The Grenadier and it's Ghosts», 3.9km