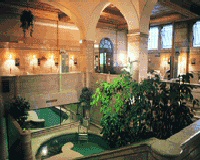 Only of the oldest spa's in England, lavishly refurbished.

Description: The Porchester was opened in September 1929. Only a handful remain. As the winter nights draw in, there's nothing better than emailing a few old university friends you haven't seen for years and then meeting up to spend a few hours in the spa reviewing life's experiences. Then you come out into the darkness completely refreshed and invigorated and pile into the Spanish restaurant next door.

Actress Jemma Redgrave said The Porchester Baths is a Victorian municipal Turkish Baths in Paddington, London - de-tox to re-tox. It's a fantastic way to relax and chat with girl friends, with a great mix of ages, bodies and cultures wonderful!.

2» Yes, as long as you are discret, it is a fanastic place to relax on mixed days so nobody takes much notice. (G.)
Posted by G. on 2008-10-01
1» I am traveling to London soon with my husband. On the weekends I understand that it is mixed (male and female). On those mixed days is it clothing optional? (Sarah)
Posted by Sarah on 2007-11-20