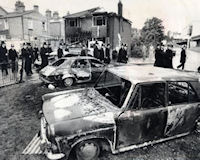 This is where 1985's Broadwater Farm Riots occurred.

Description: Broadwater Farm is an area in Tottenham straddling the River Moselle. The eastern side is dominated by the Broadwater Farm Estate, an experiment in high-density social housing built in the late 1960s. It borders the Lordship Recreation Ground on the other side.

The area acquired a reputation as one of the worst places to live in the United Kingdom after the publication of Alice Coleman's Utopia on Trial in 1985. Later that year it became synonymous with serious rioting when Cynthia Jarrett died during a police search of her home here.

The riots culminated with the horrific murder of PC Keith Blakelock who died from 50 wounds when overrun by the mob.