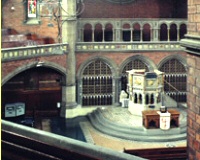 The Union Chapel, a congregational church with fab acoustics

Description: Union Chapel is a Congregational church: non-hierarchical, hence the name. It's based at the site of a church built in 1806, and the current one dates from 1877.

The pulpit is particularly handsome. Over the doorway on the right, leading to the vestries, is a piece of that Plymouth rock on which the Mayflower Pilgrims first stepped when they landed in America. The Rev. W. Hardy Harwood began his co-pastorate at Union Chapel its December, 1891, and succeeded to the sole charge in the following April, on the death of the Rev Henry Allon, D.D. one of the most respected of Congregational divines.

The present building was finished in the late nineteenth century, and is a classic example of Nonconformist church architecture: it has magnificent acoustics, and is a natural setting for concerts and also for organ recitals featuring our famous Father Willis organ. The building became somewhat derelict in the years after the Second World War, but is now being actively renovated.