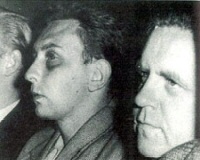 The site of the capture of cop killer Gunther Podola.

Description: It was here on 13th July 1959, in a phone box outside of South Kensington tube station that German Gunther Podola was caught by police.

He was blackmailing model Mrs Verne Schiffman for the return of some items he had stolen during a burglary. She kept him talking while the police and Detective Sergeants Purdy and Sandford arrested Podola.

He escaped and ran off towards Onslow Square where he was recaptured, but show and killed Sergeant Purdy and he made his escape.

Podola was recaptured 3 days later, and was the last person hanged in Britain for killing a police officer.