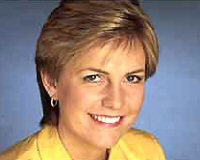 This is where BBC presenter Jill Dando was murdered.

Description: This is the house that former BBC presenter Jill Dando owned, and sold 2 days prior to her death. Jill was murdered here in April 1999 aged just 37, with a single bullet to the head as she approached the door.

After an investigation Barry George was arrested and convicted at the Old Bailey of her murder. The case is now in appeal.