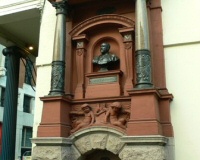 This is where mr pantomime Augustus Harris is commemorated.

Harris was was initiated into the freemasons in 1875 in the lodge of St Clair in Edinburgh, and by 1879 managed this theatre as well as Covent Garden, The Olympic and Her Majesty's. He was also the Sheriff of the city of London and was knighted in 1891.


His lasting legacy is probably as The Father of Modern pantomime, where he took them to a spectacular level never been seen before.