The Museum of Garden History 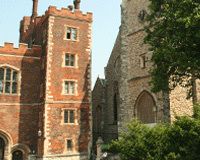 One of the cutest museums in London, all garden history!

Description: The rediscovery of the tomb of 17th century plant hunters, the John Tradescants, in the churchyard of St Mary-at-Lambeth led John and Rosemary Nicholson to save the church from demolition and found the Museum of Garden History in 1977.

While the building is one of great beauty its original purpose was not to house an historic collection and as the 20th century wore on St Marys struggled to work as a modern museum.

Today the Museum holds over 9000 objects, each one of which in some way represents British gardens and gardening.

.Objects on display range from specialist equipment made for grand country estates to improvised tools put together by enthusiasts in their own back gardens.

The earliest objects on display include ceramics that were made several hundred years ago. The Victorian and Edwardian periods are particularly well represented in the collection, while there is also a good representation of gardening since 1950.