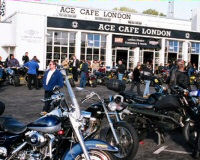 Description: The original Ace Cafe opened in 1938 on North Circular Road in London. Planned as a transport cafe to truck and lorry drivers, it quickly became a place where motorbike riders gathered. An icon to English motorcyclists, it also has a significance for bikers elsewhere in the world.

In the early fifties the Ace Cafe became the destination for a new breed of bikers. The post-war generation, bored by old values and conventions and confronted with social changes, were searching for their identity. There were two significant influences: Rock n' roll and motorbikes. Leather jackets and jeans were worn, creating the black leather rebel cult. They lived on the fringes of society and were generally ostracized by motorcycle enthusiasts. The young bikers developed their own identity and with it a tremendous group feeling. They met in cafes and rock n' roll clubs, arranging races on London's North Circular Road. They rode the hell out of their engines as they raced on their unofficial circuit. A general speed limit, when introduced, only added to the challenge.

Shunned by bourgeois middle-class society, the Ton-up boys attracted a lot of young people to their ranks and had a significant influence on the youth culture. Rock n' roll was their music, their uniform was black leather, their lives were wild and full of danger. The driving beat of the music was the rhythm, the drug was speed. Though most of the original influences were adopted from America, they were integrated and developed into a unique British phenomena. The bikes at that time, some of the best and the fastest, were English, and British musicians were as much admired as their American counterparts. By then the Ace Cafe had become the launchpad for many famous racers such as Dave Degans and rock n' roll bands like Johnny Kidd and The Pirates.

The riders who met at the Ace had their own sets of rules and codes, neither understood nor recognized by outsiders. Their wild and martial appearance didn't fit within conventional norms. Their racing, their music and the very distinctive way of expressing themselves frightened polite society, and sensational press articles fanned the hysteria for all they could. Government officials often discussed counter-measures to be taken against these youths now known as Rockers.

The peak of rock n' roll was over in the mid sixties, made safe by the Beatles; in the succeeding years the Rockers were pushed aside by the spirit of Carnaby Street and the Mod era. In the eyes of society at large, however, they remained the very incarnation of all that was evil.

The group cohesiveness of the Rockers wasn't touched, and they continued to meet at the Ace. Only very rarely would Mr. Average dare to venture inside. But time was not on their side. At the end of the sixties, during the Vietnam war, hip kids read Mao, wore long hair and listened to Bob Dylan. In 1969 the Ace Cafe closed.

Driven by a passion for bikes and rock n' roll, Mark Wilsmore started planning in 1993 to reopen the legendary cafe.

Birthplace of the Underground», 4.6km