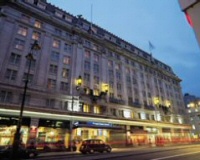 The Strand Palace, once the site of abolition of slavery speechs

Description: The Strand Palace Hotel here was erected after Exeter Hall was demolished in 1907. It opened in 1909 and was originally built in the Art Deco style, but has now been modernised. Some of its original features are held in the archives of the Victoria and Albert Museum.

Exeter Hall was erected between 1829 and 1831 on the site of the former Exeter Exchange and a menagerie, but, owing to the roaring of the lions frightening the horses in the Strand, it was cleared away in 1829.

The site was formerly part of Exeter House, the London residence of the Earls of Exeter (formerly Burghley House and Cecil House).

The hall could hold about 3,000 people, and was used for holding religious and philanthropic meetings. The official opening date was March 29, 1831. In addition to its primary function as a meeting place, it functioned as the YMCA headquarters, and as a concert hall for the Sacred Harmonic Society.

The fiery zeal of philanthropists Clarkson and Wilberforce here brought about the abolition of slavery. Exeter Hall was the centre of the anti-slavery campaign, and the example once set, its platform began to take into its particular care the cause of oppressed nationalities. Statesmen, weighing one policy against another, have had to ask What will Exeter Hall say?

It was in Exeter Hall, in June, 1840, that the Prince Consort made his first public appearance in England, when he presided at a meeting for the abolition of the slave trade. 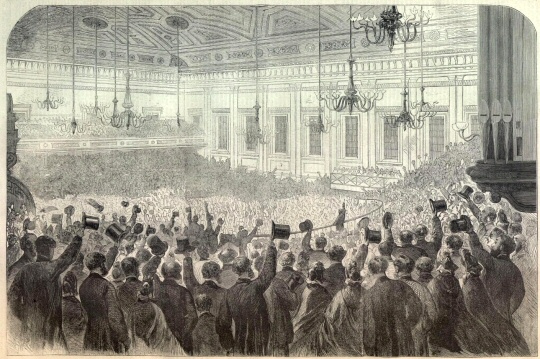 The Battle of Cable Street», 2.2km