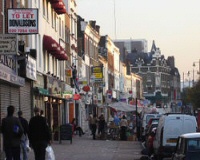 The site of suspected mafia boss's shop and subsequent arrest.

Description: This is the shop that Raffaele Caldarelli owned and where he was arrested in September 2006 for Mafia association and extortion, as well as trafficking in drugs and arms. He had already been sentenced to 20 years in his absence in 1995.

Before Caldarelli's arrest on Tuesday he had managed to evade capture in London once before and investigators, both in Naples and London, had lost track of him.

Dozens of officers were involved in the arrest and three suffered minor injuries when Caldarelli lashed out in Hackney Road.

The Year Round Christmas Shop», 1.5km