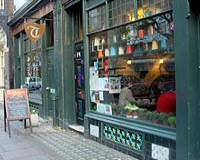 One of the most infamous music cafe's in London.

Description: The Troubadour was founded by Michael and Sheila van Bloemen in 1954 as part of the second great London coffee revolution after the 18th century's pioneer.

Through the 50's and 60's this was one of THE centres of London intellectual and artistic life.

It's where Private Eye was first produced and distributed; where the early Ban the Bomb meetings were held (the precursor to CND); and where the Black Panthers met when they left Paris after the '68 riots.

The Troubadour was the first place where Bob Dylan performed in London. He was told to 'ask for Anthea at the Troubadour' when he arrived (Anthea Joseph was manager at the time).

Richard Harris fell in love with his wife Elizabeth here (she was doing the washing up).

Ken Russell recruited staff for his first shorts here, and it was here that he became friends with Oliver Reed. Led Zeppelin used to come and jam here after their Earl's Court gigs. Tom Robinson and Elvis Costello used to play here too.

Yucel Mehmet, the owner of Maxwell's fish bar at 263 Old Brompton Road, was looking to step back from the fryer; and very sadly Encounter Overland, the travel business at 267, went bust. The Thornhills acquired leases on both these adjoining properties, and a massive building programme began.

Most of the early work was structural, and happened behind the scenes; but between December 2001 and summer 2002 the old lady resting on her laurels, as Simon called the Troub., revealed herself in a succession of new guises. First change was to the cafe, which with no perceptible change to its ambience doubled in size in time for Christmas. The Troubadour deli opened up next door in March 2002, with the gallery above it; and in July the expanded and completely refurbished Club reopened.

Breakfast at the Wolseley», 2.6km