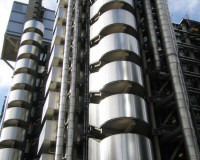 Description: The Lloyd's Building (1978-86) is the British postmodern masterpiece by architect Richard Rogers, who had a hand in the design of Paris's funky Centre Pompidou.

It was designed by architect Richard Rogers and built over eight years from 1978 to 1986. Like the Pompidou Centre (designed by Renzo Piano and Rogers), the building was innovative in having its services such as staircases, lifts, electrical power conduits and water pipes on the outside, leaving a clean uncluttered space inside. The 12 glass lifts were the first of their kind in the UK.

The building consists of 3 main towers and 3 service towers around a central, rectangular space. Its focal point is the gigantic Underwriting Room on the ground floor, which houses the famous Lutine Bell. The Underwriting Room (often simply known as 'the Room') is overlooked by galleries, forming a 60-metre (200-foot)-high atrium lit naturally through a huge barrel-vaulted glass roof. The first four galleries open onto the atrium space, and are connected by escalators through the middle of the structure. (The higher floors are glassed-in, and can only be reached via the outside lifts.)

The 11th floor houses the Committee Room, an 18th century dining-room originally designed for the 2nd Earl of Shelburne by Robert Adam in 1763: it was transferred piece-by-piece from the previous (1958) Lloyd's building across the road.

The first (1928) Lloyd's building was demolished to make way for the present one. However, its main entrance at 12 Leadenhall Street was preserved, and forms a rather incongruous attachment to the 1986 structure.