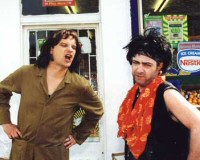 This is where BBC comedy Stella Street was filmed.

Description: This is the street where some of the houses were used for the BBC 2 comedy Stella Street. John Sessons and Phil Cornwell's look at celeb's life in Suburbia.

The main characters in the episodes are played by Scottish comedian John Sessions and Phil Cornwell. The characters themselves are impressions of famous celebrities such as Marlon Brando, Michael Caine, Jack Nicholson and, idiosyncratically, UK football pundit Jimmy Hill.