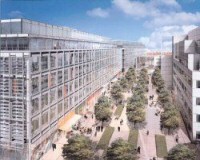 This is where the BBC are building their own village.

Description: This area used to be the White City Greyhound track and official site of the 1908 British Olympics.

The Media Village development will play a central role in the regeneration of the wider urban area and, as well as the new office buildings, includes shops, cafes, a post office and a supermarket open to all in White City - local residents and BBC staff.

We want to create working environments which will inspire our staff to new broadcasting heights, add to the BBC's heritage and encourage the local community to come in and see just exactly what goes on inside their BBC.

A public art programme of both temporary and permanent exhibitions is a major feature of the BBC Media Village site.


For the Franco-British Exhibition of 1908, 20 huge palaces and 120 exhibition buildings were built on this 140-acre site by a workforce of 120,000 men. The exhibition was eight times the size of the 1851 Great Exhibition in Hyde Park and showcased the industrial and cultural achievements of England and
France. It drew more than eight million visitors.

Made of steel and concrete, the ornate buildings were whitewashed, hence the name White City.

The site also played host to the 1908 Olympic Games. The event was originally to have taken place in Italy. However, when Rome failed to raise the finance to build a stadium, the Games were offered to London, and an Olympic stadium was
added to the exhibition plans.

The White City stadium was opened by the Prince and Princess of Wales. It housed running and cycling tracks, a swimming pool and a pitch for football, hockey,
rugby and lacrosse. The grandstands
accommodated 93,000 spectators.

The modern marathon distance was established at the 1908 Olympics when the starting line was moved to Windsor Castle to allow the royal family a good view: the distance between the castle and
the White City stadium 26 miles, 385 yards was adopted as the standard.

The site continued to be used for exhibitions and textile fairs until 1937. During the First World War, some of the larger buildings were used for the
manufacture of aeroplanes and, in the Second World War, to make parachutes. Later, film scenery was constructed in the huge spaces.

The stadium fell into disuse after the Olympic Games but was taken over in 1927 by the Greyhound Racing Association. It was also the centre of British athletics from 1932 to 1971, when a new base for
the sport was established in Crystal Palace.

Dog racing continued at White City for more than 50 years. The last event ever held in the stadium was a greyhound race on 22 September 1984, won by the bitch Hastings Girl. Demolition work began a few days later.