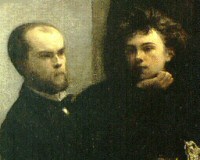 Description: Arthur Rimbaud first met Paul Verlaine in 1871. Rimbaud was 17, Verlaine 27. Both were brilliant, volatile and utterly committed to the quest for the new, in art and life. Rimbaud was a young poet in search of a patron. Verlaine was a young poet in search of distraction - not least from his miserable marriage to Mathilde, whom he regularly hit. Verlaine's brother-in-law described Rimbaud as a vile, vicious, disgusting, smutty little schoolboy, but Verlaine found him an exquisite creature. He didn't seem to mind that Rimbaud rarely washed, left turds under one friend's pillow, and put sulphuric acid in the drink of another; not to mention that he hacked at his wrists with a penknife and stabbed him in the thigh. But by then, he was in love. The two of them ran off to Brussels and then London.

Rimbaud was delighted and astonished by London. Verlaine was overwhelmed by the incessant railways on splendid cast-iron bridges and the brutal, loud-mouthed people in the streets, but inspired by the interminable docks. The city was, he wrote, prudish, but with every vice on offer, and, permanently sozzled, despite ridiculous bills on drunkenness. The two poets were often sozzled, too: on ale, gin and absinthe. Rimbaud's extraordinary sonnet Voyelles, which gained an instant cult following, was clearly inspired by his experiments with 'the Green Fairy'.

Their relationship ended with a slap in the face with a wet fish. When Verlaine came home one day with a fish and a bottle of oil, Rimbaud sniggered. Furious at being mocked, Verlaine whacked him with the fish, then stormed off to Brussels and threatened suicide. After pawning his lover's clothes, Rimbaud followed him and, in a Brussels hotel, they had their final row. With the gun he'd planned to kill himself with, Verlaine shot Rimbaud in the arm. He was jailed for two years.

1» There is no blue plaque but a marble one. I happen to own the house which has now been restored, and will be happy to supply photos. (Michael Corby)
Posted by Michael Corby on 2011-04-17