Bridge That Curls Up Into a Ball 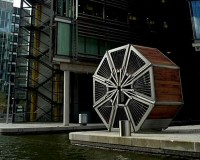 Description: This is spectacular - a bridge that can curl up into a ball...or at least it once could

Rather than a design a single rigid element that moves to allow traffic through, the studio's Rolling Bridge opens by slowly and smoothly curling until it changes from a straight pedestrian bridge into a circular structure. The 12 metre long bridge is made from eight steel sections laid with dark timber decking to bring warmth to the structure and a soft platform for pedestrians.

The Rolling Bridge uses hydraulic rams to gently curl open. The rams, which sit vertically on the bridge, lift joins in the handrail causing them to fold. As the handrail folds, each of the eight sections which make up the bridge is simultaneously lifted, to make the whole bridge curl until the two ends touch and form a circle. The bridge can be stopped at any point along its journey, whether at the very start, when it looks as though it is hovering, or half way through its curling movement.

The whole structure was constructed in Littlehampton, West Sussex and then floated up the Grand Union Canal, before being lifted into position over the canal. The structure was installed and opened to the public in September 2004.

In 2005, the bridge won the British Structural Steel Design Award.


Alas now it appears to be taking a sabbatical, and curls no more!