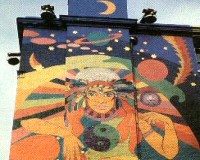 Description: This is where the famous Apple Shop was opened on 7th December 1967 until it's closure 31st July 1968.

The Apple boutique started life in the 19th century as a four-story house. Over the years it evolved into an office and shops in the busy part of London at the corner of Baker Street and Paddington Street. During the 60's three Dutch designers, Mr. Simon Posthuma, Ms. Josje Leeger, and Ms. Marijke Koeger had an initially successful fashion boutique called the Trend in Amsterdam. It was closed due to financial problems. Simon and Marijke wandered around Europe before moving to London where they met Simon Hayes and Barry Finch. Hayes became the business manager while Finch joined the 3 Dutch designers who became known as the Fool. Pattie Harrison was familiar with them and even wore some of their designs. How it all started is not clear, but in September 1967 the Beatles gave the Fool 100,000 pounds to design and stock the new Apple Boutique.