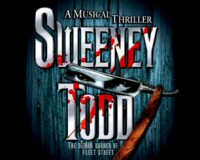 The demon barber of Fleet Street was born here in 1756.

Description: Sweeney Todd, the demon barber of Fleet Street, was born here on 16th October 1756. He was imprisoned as a child and opened his shop after learning his 'barber' skills inside before becoming Britain's most notorious serial killer.

It wasn't until reports of a stench inside St Dunstan's in l801 that the Bow Street Runners closed in. Armed with vinegar-soaked hankies they searched the vaults and found bones, human offal and clothing thought to be enough for at least l60 people. When they followed footfalls up to Bell Yard and found blood stains everywhere, the full horror emerged. The Examiner reported that Mrs Lovett was caught scraping human bones into one of her veal pies.

Todd faced trial alone, his lover having managed to poison herself in prison. He was boastful, and took pleasure in his catch phrase: How I loved to polish 'em off. He was polished off himself, aged 46, in front of a crowd of thousands outside Newgate Prison.

His barber's was a fish restaurant for years before becoming the office supplies shop it is today, while Bell Yard is a pleasant court where young lawyers stroll in their lunch hours. And the pub does a roaring trade in meat pies.


Tours: The Weird and Wonderful

The Assassination of Mr Thynne», 2.7km