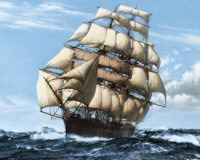 The Cutty Sark is the most famous tea clipper ever built.

Description: The Cutty Sark here is the most famous tea clipper built.

She was launched at Dumbarton on the River Clyde, Scotland, in 1869. The name comes from Robert Burns' poem, Tam O'Shanter; Tam meets a group of witches, most of whom are ugly, but for Nannie, who is young and beautiful and is described as wearing only a cutty sark, i.e., a short chemise or shirt. The ship's figurehead is a representation of this witch.

The Cutty Sark's sleek lines and enormous area of sail made her the fastest ship in the race via the Cape of Good Hope for the then particularly money-spinning tea trade with China. Unluckily for her owners, the Suez Canal was opened in the same year as her launch, which is not navigable by sailing ships. Her last cargo of tea was carried in 1877.

Later, from 1885 to 1895, she was used in the wool trade with Australia, bringing the new season's clip from Sydney to London, setting new speed records year after year.

By 1895, she was again losing money for her owner and was sold to the Portuguese as the Ferreira, although interestingly enough her crews called her Pequina Camisola ('little shirt'). She was worked by her new owners between Oporto, Rio, and Lisbon for over thirty years until 1920, when she was sold again, this time becoming the Maria do Amparo. In 1922 she underwent a refit in the Surrey Docks, London, and was driven to shelter from a storm in Falmouth harbour on her way home. A Captain Wilfred Dowman saw her there, and bought her from the Portuguese owners, returning her to British ownership again.

On Capt. Dowman's death in 1938, his widow presented her to the Thames Nautical Training College at Greenhithe on the Thames, where she was used as a training vessel. After the Second World war she again became surplus and eventually she was towed to Greenwich and placed in a specially constructed dry dock in 1954. After a lot of restoration work she was opened to the public in 1957. Since then more than thirteen million people have visited her.

In April 2007 an architecturally-stunning pavilion, on the port side of Cutty Sark in Greenwich will allow visitors to see the conversation work in action, understand the importance of the ship and even to sample the types of tea the ship would have carried in her heyday as a tea clipper.


On the morning of 21st May 2007 a fire seriously damaged The Cutty Sark - it's future remains in the balance. 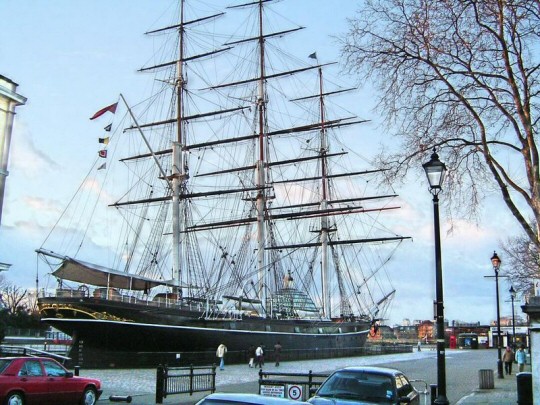