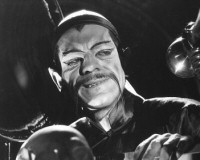 The street that gave birth to the evil Dr Fu Manchu.

Description: Fu was the hideous creation of Sax Rohmer's fevered imagination. As a 1900's tabloid hack Sax (real name Arthur Ward), went to Limehouse to probe the drug-peddling activities of Mr. King, who allegedly based himself at an opium den called Singapore Charlies in the middle of what was then London's Chinatown.

Sax didn't find his man, but did become obsessed with the area, and here on Gill Street one night he observed a tall, elegant, oriental character stepping into an impressive limo.

Sax was transfixed; I knew that I had seen Dr Fu Manchu! His face was the living embodiment of evil!

This man was the inspiration in 1913 for the first of 14 Fu thrillers that portrayed Limehouse unkindly as a fog-ridden dockside demi-monde, full of opium dens, gambling parlours and stereo-typed Chinamen with pigtails and coolie hats.