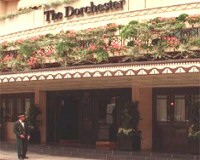 Description: It was here in a suite on July 22, 1980, shortly after 2pm that comedian and actor Peter Sellers suffered a massive heart attack and collapsed into an armchair. He was rushed to the Middlesex Hospital where he died two days later.

Built in 1931, The Dorchester was designed as the perfect grand hotel; ultra-modern in its convenience, traditional in its atmosphere and service. A year after opening, the new hotel was established as a favourite with film stars and society hostesses alike.

By the end of the decade, two new banqueting rooms, the Holford Room and Orchid Room, and a new bar had been added to The Dorchester. The barman became something of legend for his dexterity with the cocktail shaker. Examples of his Martini, White Lady and Manhattan were sealed into the wall of his new bar for posterity, to be rediscovered during building work in 1979, apparently as good as on the day they were mixed.

Forty thousand tons of soil were dug out to create basement kitchens, garages and luxurious Turkish baths, while over the public rooms he swung a raft of concrete three feet thick, to support eight floors of bedrooms.

War meant that the great literary and political hostesses such as Mrs Grenville of Polesden Lacy, Lady Sybil Colefax and Emerald, Lady Cunard, were forced by short rations and lack of servants to abandon entertaining at home. They moved their celebrated dinner parties to The Dorchester instead.

Cultural luminaries of the day such as T S Eliot and Edith Sitwell, Harold Nicholson and Cyril Conolly were summoned to dine, and discreetly presented the following morning with a bill for 10/6d. Invitations from Emerald Cunard were the most coveted - for her dinners alone were free. When the air-raid sirens sounded, she would crawl under the table and read Proust and Shakespeare to her imprisoned guests.

In 1942, America entered the war. General Dwight D Eisenhower arrived in London and soon moved into two rooms on the first floor (now named the Eisenhower Suite) where, to give him greater privacy, Winston Churchill had a wall built between his balcony and the one next door. The wall remains to this day.

It was here that on July 9th the news was announced of Princess Elizabeths engagement to Prince Philip. The Prince also held his stag party in the Park Suite on November 19th the same year.

By the Fifties, a seemingly endless stream of the famous discovered that a visit to London had to mean staying at The Dorchester, among them Alfred Hitchcock, Laurence Olivier and Vivien Leigh, Brigitte Bardot and Danny Kaye.

Generations of artists and performers have invested the hotel with something of their own flamboyance. The Oliver Messel Suite was the particular favourite of both Noel Coward and Marlene Dietrich, while Cecil Beaton was waspish about the paint work and rhapsodic about the view. Both Judy Garland and Duke Ellington made The Dorchester their London base, while Somerset Maugham would stay for two or three months every year. In the Sixties even the Beatles couldnt resist.

But it is actors who have always been most beguiled by the special glamour of The Dorchester: among them, Richard Burton and Elizabeth Taylor (who had a reputed 5 honeymoons here!), James Mason, Charlton Heston (who really liked the Italian marble baths), Yul Brynner, Julie Andrews, Warren Beatty, Tom Cruise, Nicole Kidman, Arnold Schwarzenegger and Kim Basinger.

Sylvester Stallone married American model Jennifer Flavin here on the 17th May 1997 in a civil ceremony.

Returning to Sellars, in 1964 the 38-year-old Sellers was bowled over by a chance meeting with Britt Ekland here. He bought her the entire contents of the local flower shop in an attempt to woo her.