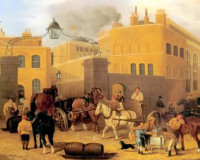 This is where plague victims were piled high long ago.

Description: This is now the Southwark Bridge Village Car Park but used to be called Deadman's Place because of the sheer number of victim's of the plague that were piled here once.

It became a burial ground up until the 1840's of an adjoining Independent chapel, and was extensively used for the interment of ministers, being a sort of Bunhill Fields for South London.

Then it became subsumed into the land owned by the Barclays Brewery.