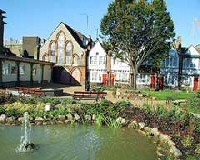 The site of Octavia Hill's Housing Development and Gardens

Octavia Hill, a co-founder of the National Trust, and ardent social reformer, established Red Cross Garden here in 1887 as an 'open air sitting room for the tired inhabitants of Southwark'.

She went on to build six neighbouring model dwelling cottages as a determined move to improve housing for the working poor, alongside a community hall, then known as Red Cross Hall, as a 'Parish parlour'.

Red Cross Garden itself was laid out on the site of a derelict paper factory and a hop warehouse. Its meandering paths are to give a sense of space and a place to wander amongst the curved lawns and flower beds. An ornamental pond was made with a fountain to provide beauty and movement, offering a focus for contemplation. The bandstand provided for performances of music and poetry.

Where the new building now stands, Octavia Hill had a covered play area for children so that they could be outside in sunshine or rain, and overhead a walkway for viewing the garden, accessed by stairs which ran up at the end by the Hall. Colourful mosaics brought art and beauty to the working poor - The Sower mosaic still remains, but there was also a beautiful glass mosaic called The Good Shepherd - unfortunately this seems to have been lost when the warehouse that bounded the garden on the north side was demolished. The garden was the venue for the annual Southwark Flower Show, and many fetes and celebrations.

The National Trust's Ian Wilson says: Octavia was a radical thinker and more importantly a doer! Her belief in the need to better the lives of those less advantaged is an enduring principle that still inspires many thousands of people today. The project at the Red Cross Cottages is an excellent example of how she worked, sometimes on a very small scale, to make a real difference to people's lives. At a time when issues of housing quality and access to green space are once again at the forefront of our minds it could not be a more appropriate time to honour her achievement and highlight the issues she cared about.