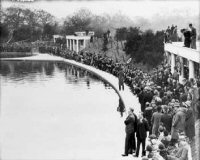 The Birdman of Winchmore Hill», 5.8km