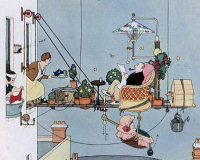 This is where cartoonist William Heath Robinson lived and died.

Description: William Heath Robinson (1872-1944), best known for his cartoons of intricate machinery, and nick-named The Gadget King, lived in Southwood Avenue, Highgate, for the last nine years of his life.

Born in Hornsey Rise, Islington to a family of artists, he began his career as an illustrator for classic children's books such as Arabian Nights and fairy tales from Hans Christian Andersen.

Shortly after Will's birth, the family moved to Islington, which is where he went to school before enrolling at the Royal Academy, where he studied from 1892 until 1897. After leaving the R.A., he sold only one painting, but established a reputation as an illustrator for such authors as Kipling, Poe and Rabelais, as well as Shakespeare's Twelfth Night and A Midsummer Night's Dream.

In 1903, he married Josephine Latey, the daugher of the editor of the Penny Illustrated Paper and the Illustrated London News for both of which Will's father, Thomas, had provided drawings. Will and Josephine were to have a girl and four boys.

In 1906 appeared the first of the drawings of the machines with which his name will forever be associated. A Heath Robinson device is one which is designed to perform a very simple task, has become extremely run down, requires a huge staff of attendants (always with terribly serious faces) to operate it, and which consumes far more energy than the end product justifies.

In 1933, these drawings made perfect illustrations for Norman Hunter's hilarious tales of Professor Branestawm, the mad scientist. 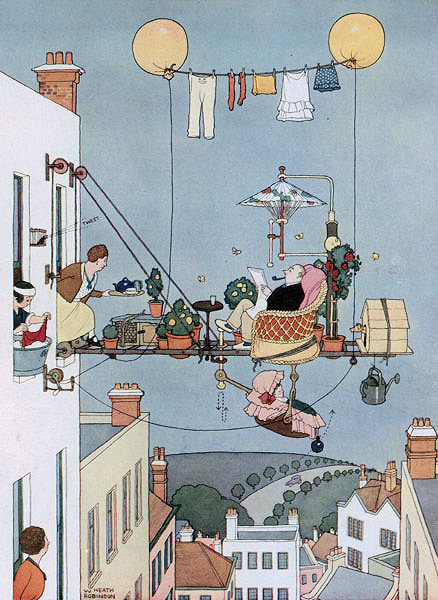