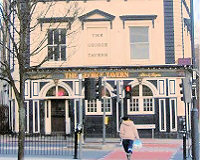 This is the old pub whose light Kate Moss is trying to save.

Description: The George Tavern in Stepney is a popular hangout for musicians, having been graced by the likes of Duran Duran, the Rolling Stones and Nick Cave in its history.

It's currently under threat from the developers of the byuilding next to it blocking out it's light/view. Amy Winehouse and Kate Moss are spearheading the celeb campaign to thwart the developers.

The George purportedly survives because of these photo/film shoots and the place is so sought after because of the very special light. This light will be blocked by the new residential development, putting an end to this livelihood. The shoots bring money into the area, they also bring an air of excitement to the community.

It is 350 years old and used to be known as the Stepney Halfway House.