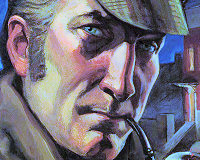 Description: Sherlock Holmes and Doctor Watson lived at 221b Baker Street between 1881-1904, according to the stories written by Sir Arthur Conan Doyle. The famous 1st floor study overlooking Baker Street is still faithfully maintained as it was kept in Victorian Times.

The house was built in 1815 and is listed by the Government to protect its architectural and cultural heritage.

It is open as a museum dedicated to the life and times of Sherlock Holmes, and the interior has been faithfully maintained for posterity exactly as described in the published stories.