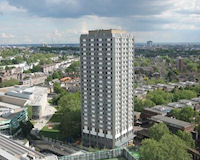 This is where a terrible fire killed dozens of residents.

Description: This is where the terrible fire in the early hours of 14th June 2017 caused at least 80 deaths and over 70 injuries, with a definitive figure not expected until 2018.

It was named after Grenfell Road which ran to the south of the structure prior to construction. The road was originally named after Field Marshal Lord Grenfell (18411925), a senior British Army officer.