Scene of the great Tooley Street Fire in 1861

Description: In 1861 the Great Fire of Southwark destroyed a large number of buildings between at Cottons Wharf, around Tooley Street and the Thames. Many buildings from Hays Wharf, where Hays Galleria was later built, and blocks to the west almost as far as St Olave's Church were affected.

The fire caused damage worth more than Â£2 million (around Â£100 million in current prices) and claimed the life of James Braidwood, head of the London Fire Engine Establishment. 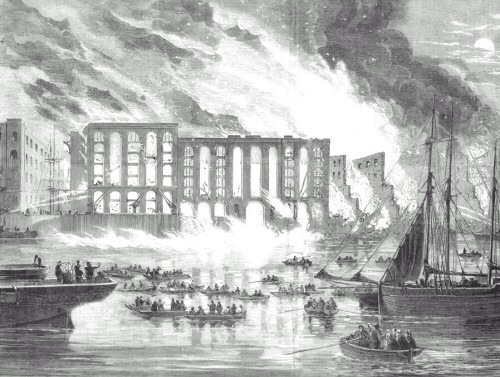 1» I have a beautiful conch shell with inscription of in memory of james braidwell who died in the tooley st.fire, loved by all. Does anyone know anything about it? (Anonymous)
Posted by Anonymous on 2009-07-27