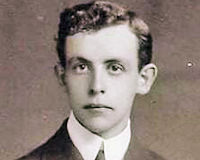 The wireless operator on the Titanic who survived.

Description: This house is where Harold Bride grew up; he was the junior/second wireless operator of the ill-fated Titanic and survived to tell his tale.

As a youngster obsessed with the new science of wireless telegraphy, he intrigued the neighbours here by stringing wires from the house to the garden shed - long since disappeared - in which he carried on his experiments.

His father, ASL Bride bought the house from the Cator Estate in 1903, and the family (including Harold, when he was not at sea) lived there until their father died and the house was sold in 1922.

His first ship was the Haverford, then the Lusitania, La France and finally the Anselm, before joining the Titanic at Belfast on 9th April 1912. On the night of the sinking he sent the SOS signal after the ship struck an Iceberg. His detailed account of the sinking and the band playing while the water rushed in and the panic is the stuff of legend.