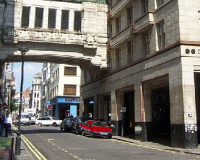 This is where a tornado ripped the doors off causing havoc.

Description: Tornados have hit London a number of times, most recently the ferocious incident that blitzed Kensal Rise, northwest London in December 2006. But on this date 80 years ago, the centre of the capital was struck by a tornado.

About 8.15pm, in pouring rain, a fearsome gust of wind ripped through the capital from Victoria to Euston station. The areas around Piccadilly Circus and Oxford Circus were especially badly hit. The roof was lifted off a labour exchange in Great Marlborough Street, narrowly missing one man walking by. There was a terrific crash behind me and I just escaped being crushed by a great mass of debris, Mr Maurice Kaizer told The Times. Amazingly no one was seriously injured or killed, although people were swept off their feet and a taxi was blown several yards down a road.

There was pandemonium at The Piccadilly Hotel, where the front doors were blown off by the tornado's blast. The wind howled down the lobby and the next thing there was general confusion, said a spokesman for the hotel. The tables at which people had been dining were swept clear of linen, plates and food. Carpets blew up from the floor, and the winds rushed down the chimneys bringing with it a cloud of soot. People were smothered in soot and food.

That same evening, tornados also appear to have struck Bromley in Kent and Hythe near Southampton.

Today the hotel in Piccadilly is still a hostel for backpackers.