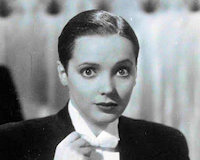 The childhood home of 1930's star of the screen Jessie Matthews.

Description: Star of stage and screen in the 1920s and 30s Jessie Matthews was born here in a flat behind/above a butchers' shop. She was one of 11 children of a Soho costermonger, she enjoyed dancing (learning at the dance studio across the road) from an early age.

Jessie Margaret Matthews OBE was an English actress, dancer and singer of the 1920s and 1930s, whose career continued into the post-war period.

She starred in Gaumont films here in the UK including Evergreen, Sailing Along, The Good Companions, First A Girl and Climbing High. Her top hat and cane in Sailing Along helped Jessie to embody 1930's style.

After a string of hit stage musicals and films in the mid-1930s, Matthews developed a following in the USA, where she was dubbed The Dancing Divinity.

She returned to the UK after The Second World War when she staged a comeback replacing the lead actress in the radio soap Mrs Dale's Diary in the 1960s.