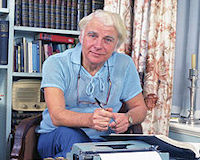 This is where playwright Emlyn Williams lived and died.

His best known play was Night Must Fall (1935), where he played the baby-faced killer Danny, and later adapted for two films. He also wrote A Murder Has Been Arranged (1930) and The Druid's Rest (1944).

He wrote the 1938 semi-autobiographical The Corn is Green which was dramatised at the Duchess Theatre and Emlyn starred as schoolboy Morgan Evans in it.

Williams was married in 1935 to actress Mary Marjorie O'Shann (Molly Shan), who died in 1970, but he was actively bisexual throughout his adult life.

He died here at the age of 81, from complications from cancer on 25th September 1987.