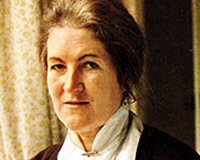 This is where fashion designer Laura Ashley started her business

Description: Laura Ashley was born in Wales in 1925. In 1953 she and her husband Bernard began hand-printing textiles on their kitchen table in their flat here at 83 Cambridge Street, Pimlico.

It was the combination of Laura Ashleys fabric designs and her husbands business and engineering skills that made them a successful team. They visited the major London stores to sell their tea towels, scarves and place mats and early customers included Heals, Liberty and John Lewis. The designs sold so well that they founded a company Ashley-Mountney Ltd in 1954 and Bernard left his job in the City to devote himself full time to the company.

The Ashleys moved with their children to Surrey in 1956. In 1957 the company became known as Laura Ashley Ltd and began trading with Europe, USA and Australia. In the 1960s the family moved the company to Carno, Wales and her romantic, English country look blossomed. In 1968 their first shop opened in South Kensington, London. In 1977 the company was presented with the Queens Award for Export Achievement. Laura Ashley continued to expand into home furnishings, finding inspiration in old prints, papers and fabrics seen in museums, and from quilts and motifs particularly of the Victorian era.

Laura Ashley died suddenly and tragically from a fall in September 1985.

Home to the Geisha Kimonos», 1.5km