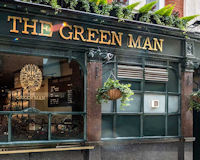 Description: The Greene Man on Euston Road was formerly known as the Green Man (and Porters Bar) and before that, the Farthing Pie House or Pye House because the mutton pies could be bought there for just a farthing.

This was back when it was first established around 1708 and surrounded by farmers fields and pleasure gardens.

Thomas Price, the pubs most famous landlord, was known for his skill in making music by beating a salt-box with a rolling pin, accompanying musicians such as Carl Friedrich Abel on the violoncello.

The place was then frequented by notable artists and writers including William Blake, Alexander Pope, Daniel Defoe and Welsh painter Richard Wilson (who played skittles here).

The radical MP John Wilkes campaigned here for election to the Middlesex constituency as the suffrage was limited to wealthy freeholders who could always be found here out of the city. He washed down his pies with large quantities of claret and port while canvassing in the pub for votes in the 1760s and 1770s.

It's mentioned in Daniel Defoes 1722 novel Colonel Jack which alludes to the tavern when young Jack crosses London into a large field named after it.

Lucan, Cubitt and some Plumbers», 1.8km