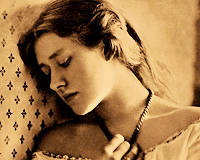 This is where actress Ellen Terry lived and taught.

Description: Dame Ellen Terry, the famous actress, lived in this 18th century townhouse from 1904 to 1920. A squint-or-you'll-miss-it brown plaque adorns the building.

Sir Henry Irving's leading lady Ellen Terry's greatest gift to the house was a theatre, where she once gave performances and taught, is now a kitchen. She left when she starred in Captain Brassbound's Conversion, a play by G. Bernard Shaw, that took her to the United States.

It has also seen other distinguished owners such as Dr Thomas Arne in 1771, composer of Rule Britannia, to actor Peter Ustinov who lived here in the Fifties.

Another resident was Princess Elizabeth of Yugoslavia who bought it in 1966 for 7,000, albeit leasehold.