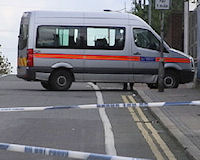 This is where the 2011 London Summer riots all began.

Description: This is where Mark Duggan was shot dead by armed police on Thursday August 4th 2011, and somehow triggering riots two days later which spread like wildfire across London and Britain in the following days.

The death occurred during an operation where specialist firearm officers from Operation Trident, which deals with gun crime in the local African and Caribbean communities, are attempting to carry out an arrest.

Mr Duggan was a passenger in a minicab and was shot after an apparent exchange of fire.

A police officer's radio was later found to have a bullet lodged in it.

The Independent Police Complaints Commission (IPCC) announces it will investigate the incident and later says it believes two shots were fired by police. It also confirms that an illegal firearm was recovered from the scene.