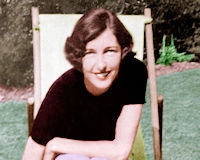 MI6 female secret agent lived and died in this hotel.

Description: Formerly the Shellbourne Hotel, and today its the boutique 1 Lexham Gardens hotel, but was home to Christine Granville (1908-1952) for the last three years of her extraordinary life as Britains longest serving female agent.

The hotel the last of the 1870s grand townhouses left on this side of Lexham Gardens was run by the Polish Relief Society to provide cheap accommodation for immigrants.

Born Krystyna Skarbek she was one of the most remarkable secret agents of the Second World War, running many successful missions making full use of her multi-lingual abilities, powers of persuasion, and courage to save countless lives.

MI6 recruited her as their first female spy in 1938, and from the winter of 1939 Krystyna made several journeys in and out of Poland. She trekked and skied across the border, smuggling money, arms and explosives, and bringing back valuable intelligence once on rolls of microfilm carried inside her gloves as well as escapees.

Granville was audacious and secured the release of Francis Cammaerts and two other agents after they had been arrested by the Gestapo and were awaiting execution. She posed as a British agent and persuaded the captors that, with a British invasion imminent, they would meet a terrible fate if they executed the prisoners. With the help of a bribe the agents walked free and she was awarded a George Medal and OBE by the British and a Croix de Guerre by the French.

After the war ended, she settled in London here where she had a regular room on the first floor.

On the evening of Sunday the 15th June 1952, she returned home here to find former lover-turned-stalker Dennis Muldowney waiting there. He stabbed her to death in the hallway, and later hanged for the murder.

Time to Honour and Respect», 1.7km