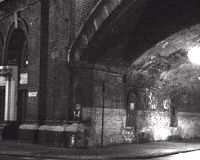 The air raid shelter that took a direct hit in 1940s disaster.

Description: Bermondsey suffered the largest number of bombs in London during the blitzes of the Second World War. This was because of the areas proximity to the Thames and main railway interchanges. Here at the Druid Street Arches was one of the many arches along the railtrack which were used as shelter during air raids.

The area under the arch was used as a social club and billiards hall during the day. At night, it was transformed into a sanctuary from the bombing. The ominous sound of the sirens were the cue for local people to congregate as quickly as possible in a bid for safety.

On the night of 25 October 1940, hundreds of people were sheltering like this at Druids Arch during an air raid.

It received a direct hit. Many were killed instantly and many died later of their injuries. The final death toll was 87. Druids Arch marks the site of the worst disaster in Southwark. It is remembered today by those who survived the Second War World and by their families.

The Battles of Brentford», 10.km

Time to Honour and Respect», 3.2km