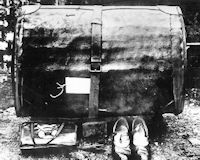 The location of the Charing Cross Trunk Murder mystery.

Description: The row of houses was long demolished and this 1970s office building sits where once a rather nasty business occurred.

John Robinson had an office here on the second floor of number 86, and his story is that he went to the post office to buy some stamps and met a woman who returned to the office here with him.

The woman was Mrs Minnie Bonati, a local cook, and according to Robinson she demanded money. She became abusive and as she attempted to attack him, he pushed her and she banged her head. He left, only to return the following day to find her unmoved and quite dead.

He proceeded to cut her up and put her body parts in a trunk which he then left in storage at Charing Cross station on the 6th May 1927.

After being caught he was found guilty and executed at Pentonville Prison.