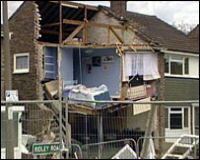 Description: It was here on the 11th April 2006 that Eve and Terry Shepherd's house woke to serious cracks and noises.

They got dressed and tried to get out but their front door was stuck. They woke their neighbours who also had difficulty getting out of their property.

Within hours the front of the Shepherds' home had fallen away into what is believed to be an underground cavern of some description.

The house was near the rail track and a 40-metre exclusion zone was set up shortly after the collapse - causing disruption to Eurostar and domestic rail services.